Unlike other touch control digital picture frames which are already available on the market, RONBEN's touch LCD digital frame is the real touchscreen photo frame. Touch the icons on the LCD like what you do with your Iphones instead of touch keypad on the DPF casing. This is totally different with those digital picture frames with touch keypad, when touching the keypad of those digital frames, the virtual key icons appeared on the LCD automatically, but they are not touchable at all.

However, RONBEN's touchscreen DPF can fully realise the touch control via a 6-key virtual icon, see the following Youtube clip and pictures.

In the entry interface(main menu), touch any icon from 'PHOTO',"MUSIC","PHOTO+MUSIC","MOVIE","Alarm","Calendar" ..to "SETUP" and enter into the next interface perspectively, touch any area of the LCD will activate the 6-key virtual icon.
The 6-key virutal icon consists of "UP","DOWN","LEFT","RIGHT","PLAY/STOP", and "MENU". The ICON is floating in a fixed area on the LCD and it will fade out within 3 seconds if next touch is not available. 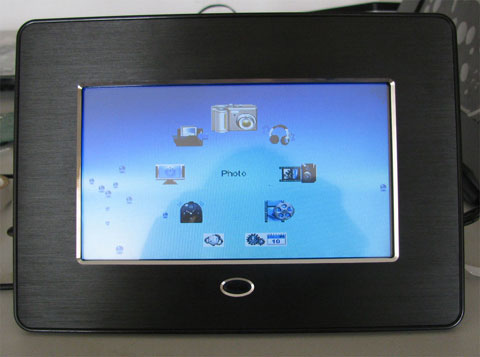 In the bottom of the icon, it is the 'menu' key, touch it and go to the main menu at any interface.

Touch the directional icons(UP, DOWN,LEFT,RIGHT) to rotate the photo, adjust the playing schedule as well as the volumn, use 'PLAY / STOP' icon to confirm your selection/operation.

In the "SETUP" interface, use the directional icons(UP, DOWN,LEFT,RIGHT) to select the operation you need and touch 'PLAY / STOP' icon to confirm your selection. 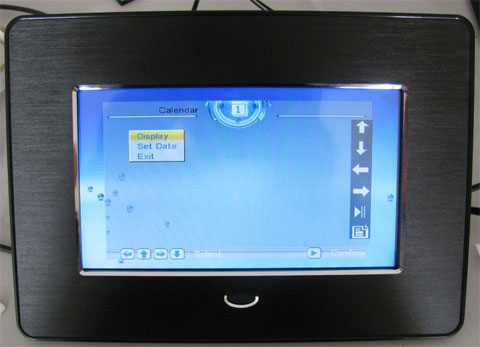 As an experienced China OEM ODM supplier, RONBEN has great software developing capacity to meet any of your demanding OEM/ODM customization requirements. For example, we shall use touch screen digital frames as in-store advertising multimedia player, and we can add split 4/9 windows with preloaded video clips so that the visitors to the stores can touch the split window and watch the video for the product they like. This video-on-demand features can be realised in our labs with a tiny change in our software.

RONBEN has finished developing the full touch control user interface(UI) early April, the enhanced UI lets users to touch control any icon on the screen, instead of the on-screen touch border like what the above showed. For the sake of proventing the copying of the creative UI, we are sorry we would not disclose them publicly.